JUDY WOODRUFF: And before we go tonight, we return to our lead tonight, and that is to our Yamiche, who has more on what President Trump had to say late this evening after he was impeached for the second time -- Yamiche.

YAMICHE ALCINDOR: That's right. Well, just after President Trump was impeached again, he released a video condemning violence, but also pushing back on what he says is unfair censorship. Here's what he had to say:

DONALD TRUMP, President of the United States: Every American deserves to have their voice heard in a respectful and peaceful way. That is your First Amendment right. But I cannot emphasize that there must be no violence, no lawbreaking, and no vandalism of any kind. Everyone must follow our laws and obey the instructions of law enforcement. 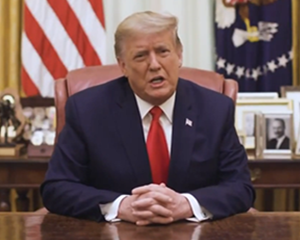 YAMICHE ALCINDOR: Now, this is the president saying things that people, including Democrats and Republicans, wanted him to say months ago. He doesn't mention president-elect Joe Biden becoming the next president. He also doesn't mention impeachment. People that I have talked to say this is really too little, too late. One person I talked to, a former Trump campaign adviser, said that he was harassed at an airport for hearing and telling someone that Vice President Pence did the right thing by not pulling back on the election count. That person said that this is really too little, too late, because there are millions of Americans whose minds are poisoned by the idea, the false idea, that the election was stolen -- Judy.

JUDY WOODRUFF: And no acknowledgment of any role in what happened, Yamiche; is that right?

YAMICHE ALCINDOR: No, no acknowledgment. He doesn't take any responsibility or express any sort of regret or saying that he is sorry to the American people, despite all that we have experienced.